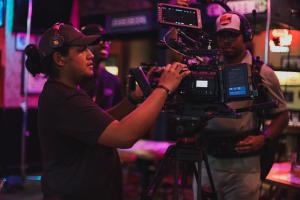 Kerwin Escobar during a film shoot Photographer and expert in all things about cameras and filmmaking and more. You can read his full interview in our New York Art Life Magazine

I believe creativity has no limit or end, and it is all about finding new ideas on the horizon.  ”
— Kerwin Escobar
NEW YORK CITY, NY, UNITED STATES, January 25, 2023 /EINPresswire.com/ -- This week New York Art Life has the pleasure of interviewing, the one who captures the image. Let's talk about Kerwin Escobar.

He has worked across many different genres of film and these works differ from each other greatly both in technique and style. He employs a lot of various cameras and lenses depending on the projects and their length, which explains his having so much experience knowing about them and being able to be part of so many different features, shorts, commercials, and other shows. Kerwin Escobar also handles different aspects of filmmaking such as gaffing, photography, focus pulling, and being a camera operator. Currently, his main work evolves being a 1st assistant camera (AC).

Kerwin Escobar mentions being appreciative of being able to work with cameras and be around the world of production daily. To Kerwin, showing the world and his audiences his perspective and the way he sees everything is the best gift he can give, which is what he is passionate about doing. He always thinks about the process which will affect the final product and the way he needs to adjust the lenses he will be looking through for the intended result.

Kerwin Escobar is also a master of knowing the different varieties of cameras and the ins and outs of working with them. He is fluent in ARRI Alexa Mini, ARRI Alexa Mini LF, ARRI Amira, and ARRI Classic, to name a few. Most recently he was a photographer at the Houston Cinema Arts Festival, which is one of the greatest film festivals to be held in the film and production world. Kerwin mentions how “the art of photography is one of the most powerful ones in connecting people one-on-one.”

He was also the 1st assistant camera for the feature film Armstrong, directed by Lex Macon which was widely appreciated and won several award shows and film festivals such as the American Independent Film Festival and the Tokyo International Monthly Film Festival. He worked as 1st AC for T.I.M.E, winner of Outstanding Narrative Short at the Greater Cleveland Urban Film Festival. This short film is very inspiring and quite different from the other forms of the film he has been active in assisting with, such as the short films and features he worked on. Kerwin was also the still photographer in an award-winning campaign called A Mother’s Work. The commercial was most recently the winner of the AAF Gold – Social Media campaign. He was also involved in work behind the scenes for the commercial Make Room for Creativity, the winner of AAF Bronze, Internet Commercial.

Kerwin has worked on different features, shorts, and commercials. He was responsible for the amazing work in “Induced” the feature, whose director of photography was Qasim Barnes. The work in this feature was very intricate and detailed, and for this, it was nominated for Best Feature at the Independent Horror Movie Awards. He also did the camera assisting in “Still Got Game” the short film, shot here in New York in locations all over Brooklyn and Manhattan. The work on these two projects is undoubtedly different in technique, and so is the work he presented in the commercial for Axonius with Simone Biles. That commercial received a lot of praise because of its amazing camera work and how many impressions it got.

Kerwin is currently pursuing new projects that will highlight his style and the way he sees the world. There are definitely unique details he captures that the world must see, and he is on a mission to bring them to life with every project he has done so far.

For inquiries or corrections to Press Releases, please reach out to EIN Presswire.
✕
× Close Ad